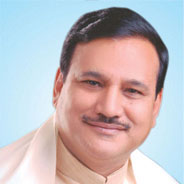 As an Educationalist & Administrator, Dr. Pathak has spent 7 years as Head of the Department (Commerce
& Management), Ishwar Saran Degree College, University of Allahabad & Registrar Maharishi Mahesh
Yogi Vedic Vishwavidyalaya, Madhya Pradesh. As a Management Expert & Research Associate, he has been
associated with G. B. Pant Social Science Institute, Allahabad, and Institute of Engineering & Rural Technology,
Allahabad and more than two and half decades he is associated with Maharishi Mahesh Yogi’s worldwide
organization as National Director (CPR), MVM Schools Group India and served as a Project Head in the field of
Education, Socio-Economic Development Programmes and Rural Development Projects.

He is also the President of Human Resource Development Foundation & Secretary General,
Environmental Health Organization and Member of the Executive Committee of many NGO’s.

He has been awarded Bharat Gaurav Award by His Excellency Shri B.P. Singh, Governor of Sikkim at
New Delhi on | 2th January, 2013. Economic Growth Society of India has also confirmed Jewels of Asia Award
2015 to him. Citizen Integration Peace Society of India has awarded International Gold Star Millennium
Award on [8th January, 2015 at Bangkok (Thailand). Economic Growth Society of India Presented him Global
Achievers Development Award on 20th April, 2013 at Kathmandu (Nepal), In recognition of Sterling
Merit, Excellent Performance and Outstanding contribution for the progress of the Nation and Worldwide.
American Organisation of Intellectuals, New York (USA) has also nominated American Excellence
Award for his Achievement on | 2th Dec., 2002.

It gives me immense pleasure to welcome you all at Kids Club School as we enter a
new decade in providing quality education. The school continues towards
establishing the high standards of education.

With the guidance of the school’s Founding Father, we are able to deliver value-
based contemporary education for our student’s holistic development. We believe
that our institute is a temple of learning and for providing students with ample
opportunities to develop their skills and personalities by not only building them great
scholars but also making responsible citizens.

Education is about creating a bridge between the knower, the known and the
process of knowing. We believe that the basis of all life endowed with the ability to
know anything, do anything and accomplish anything.

The process of education starts with experience, then understand, application,
verification, authenticity and finally organise to perpetuate this holistic path of
enlightenment through tradition of teaching in long corridor of time – by
amalgamating traditional school of thoughts and modern system of education to
achieve the ultimate goal of life with quality living.

Kids Club School offers a Consciousness Based Education Curriculum, Balanced,
Contextualized to the school student from play group to class secondary that will
prepare them comprehensively for life oriented, value based individual and from a
firm base for study in higher classes and fulfill the goal of education i.e. Action –
Achievements – Fulfillment

The curriculum of Kids Club School is based on the mantra, “Life is bliss” and ‘Let
children be themselves’. Where children are given wings. The school also ensures
that they develop strong roots. Most importantly, children are loved and made to
feel cherished so that they approach life with a positive attitude. In a way, Kids Club
School ushers the child into a world of possibilities, where his/her personality
blossoms.

Life is bliss & you can accomplish what you desire by determination, discipline,
dedication & devotion.

Our moto is “eq ent tem” “sat sanidhayo ver tyagah”’. Revert The Enemy
Before Its Birth – Enmity Converts Into Coherence.

| take this opportunity to thank all parents for their valuable suggestions and request
them to keep doing so and help us on the perennial basis.