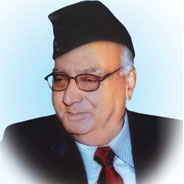 Major Indrajeet Sinha the FOUNDER of KIDS CLUB SCHOOL was the divine
force who dedicated his whole life in creating a quality of character and providing a
quality education to the building blocks of our nation, our students in order to
strengthen the base of our nation. He took a step forward to create a well-educated
society to do his part in developing our nation.

Major Sinha was in the 5th Gorkha Rifles in the Indian army from a VICTORIA CROSS
awardee family and COLONEL BAHURAN SINHA father of Major Indrajeet Sinha
was the first INDIAN COLONEL in the British Army. Major Sinha was a very
brave soldier who has been honored with multiple medals for valor and strategic
territorial advances.

He fought in two of the most crucial battles against China in 1962 and Pakistan 1971.
At the age of 16 he joined the state army led by MAHARAJA MAN SINGH and
later the Indian army. He got his early education from Cambridge, Delhi and later
St. Xavier’s, Patna. He got his higher degrees from the Maharaja College, Jaipur.

As Full Commissioned Officer he has received commission by Dr. Rajendra Prasad,
First President of India in the year 1951 and took an early retirement at the age of 38
as he valued other chapters of his life equally. He devoted all his resources and values in
the school to guide the children and to help them become successful and competent
human beings in all walks of life. He believed in equality among all caste, creed, race or
gender. He was a feminist and believed in empowering woman.

He was a great man with even greater values and will be always remembered in our hearts.